← APOCALYPSE IS LIVE ON AMAZON!
STEPHANIE ERICKSON’S ‘THE BLACKOUT’ →

Today we have a cover reveal for Stina Rubio’s ‘The Forgotten Princess’. Great cover Stina! Looking forward to the book. 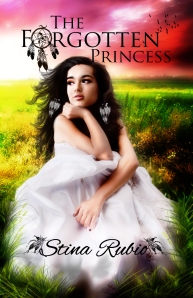 Amaya is a seventeen-year-old girl, who is anything but normal. Her father abandoned her as an infant, leaving her to be raised by a verbally abusive mother who –by the way– is never sober. Leaving her to defend herself, Causing Amaya to become a social outcast. One night while walking home from a party, Amaya was struck by a car while crossing the street, leaving her in a coma. When she wakes in the hospital a few days later, she is visited by a very strange-but-handsome man. When left alone he starts telling Amaya her life is more then what it seems. There is a Prophecy telling of a fogotten princess who will save his clan, the Suisuni Indians. Eli, the strange yet very sexy man, is suppose to be Amaya’s soul mate; the one who she is to marry. With nothing else to lose Amaya sets out on a journey with Eli, a journey of unanswered questions; a journey to find her absent father. Along the way Eli teachs Amaya who she is, and introduces her to a world of magic and myths. Will Amaya be able to handle all the pressure everyone set on her shoulders? Will she be able to forgive the father who left her? Most importantly will she be able to live up to the prophecy of the forgotten princess?

On a day in September,
our world will be gone forever,
Unless we can find,
The one person lost in time,
A Princess who he shall bear,
With traits from her mother; fair,
A moment lost in time,
That we must diligently find,
born to another,
A warrior like no other,
He shall be the lost princesses fate,
Side by side they fight,
True soul mates,
Trained to love and protect,
Her warrior is the key to her merriment,
Love is the truth,
Death is the way,
Together they fight,
Together they slay,
Two souls one destiny,
Together and only together,
Will they bring peace and harmony.

Stina is the mother of three energetic boys (Daniel Jr. age 8, Zion age 6, Ezra age 1) they are her everything, the Princes’ of her heart. She has been with her husband Daniel for 11 yrs., and still going strong. The only other thing in her life she loves with a passion is writing, well and reading. She started writing poems and short stories, her short stories geting negative attention from teachers, thinking Stina was demented. Writing has always came easy to Stina because her imagination always runs wild.

← APOCALYPSE IS LIVE ON AMAZON!
STEPHANIE ERICKSON’S ‘THE BLACKOUT’ →

This site uses Akismet to reduce spam. Learn how your comment data is processed.