TALES OF ARADIA: THE LAST WITCH: VOLUME ONE (REVIEW AND FREE BOOK)

Witches, Vampires, Werewolves, and Fairies, Oh my! A secret world, which only the Hidden knows about and a young girl trying to figure out what she is and grow into her own.

Aradia Preston looks just like your normal teenager, but she is anything but normal. Being rescued and found in a cave as an infant by her parents, Ross and Liza, had to be from a higher power. While Ross and Liza were on their way back home from a fertility clinic in Salem, Massachusetts, Liza asked for a sign and not that long after they spotted a bright flash of light. With their truck messing up and wanting to find out what that light was, they happen upon a whimpering baby in a cave.

How could that be, who would leave a baby all alone in a cave? What they don’t know is that Aradia is the last of her kind, while all the other like her were
being killed for treason and extinguished, the Seer of the Salem coven escaped and with her magic sent Aradia to safety. All that took place almost four-hundred
years ago. How is this possible that she is now found as a baby?

Having to move to Salem, Massachusetts for her father Ross’s new job as the assassinate District Attorney and working on finding a killer going around that is known as the “Vampire Murderer” since whoever is killing is draining the victims of their blood. Aradia is trying to take everything in stride. She’s never been popular or the most liked where she came from, since she was kind of different, her and her parents knew this from the moment they found her. Rai has powers, and they will do anything to keep them a secret.

Rai notices that some of the students at her new school are always staring at her, like they are fascinated with her. It isn’t just because she is the new girl there is something different about it. Rai notices how some of the kids are a bit too beautiful to be real, and those are the ones who she would catch
gazing at her. Why are they acting so weird?

In gym, Rai meets a new friend, Roy. Roy and Aradia would soon become good friends after they find out each other’s secrets. What is Roy’s secret? He is not completely human. And something that happened between them might end up changing her life. What is it?

Aradia learned that there were werewolves, vampires, fairies, shape shifters, and much more, not only in Salem, but all over the world. They are called The Hidden. They don’t let anyone know what they are, they have to keep secret and that’s how they like it. Learning that other creatures live in Salem, now she knows why some were looking at her like they do, but now she just needs to figure out what she is.

Aradia isn’t the only one who would like to find out what she is. Some of the Hidden want to know as well. They have never smelled anyone like her before.

Soon weird things start to happen to Aradia. She is getting hurt at school, getting tripped down the stars, her hand gashed open and when this starts to happen, Roy and his brothers help protect Rai.

With trying to help find the Vampire Murderer, Rai starts dating a vampire named Dax, but could he be getting closer to Rai for only one reason, that reason being trying to figure out what she is, or could he really like her?

Aradia just doesn’t have to worry about the murderer, Dax, and finding out what she is… there is something bigger going on behind the scenes, there are others that are trying to track Aradia down, they are the ones that let her get away and now they want to fix that problem. Using her powers more and more, and having
them get stronger, she is sending out a “beacon” for them to find her.

Can Aradia help The Hidden community not attack each other, or will it backfire in her face? Will she be able to find out what she is and where she came from and can she trust the ones around her? Aradia will soon find all that out and much more in Tales of Aradia: The Last Witch.

Tales of Aradia was a fast read, with lots of action, secrets, and mystery. It keeps you entertained throughout the whole book. I’m excited to read the next book and find out what happens with Aradia and how she grows into who she is. Everything intertwined well, and the story flowed just right. I enjoyed how there was a multitude of paranormal in one book. A good book to put on your to-be read list. I give Tales of Aradia 4 stars!

“It is done. She has been sent to where she can be happy until the time comes to avenge her people! She will destroy you! You and your Sovereign!”-Seer

“I’m not your puppy, Rai, and I’m certainly not a Twilight fan!”- Roy

“You are suggesting I betray her trust, trick her!”- Dax

“Yes, Aradia. Not only are you a witch, but you are also the last of your kind. You, Aradia, are the last witch.”- Mr. Dayton 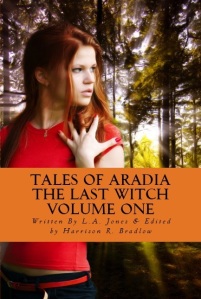 FREE ON AMAZON, SMASHWORDS, AND BARNES & NOBLE! GO GET YOUR COPY!

If you grab your free copy, please consider leaving a review. Every review helps the author.

Xianne: A Comedy of Cultures: Volume 1

I have to say that this is one of my favorite books. Not only is it funny, and hot as hell, but it has an underlying message that I hope everyone gets. It is a satire and it deals with societies problems in a humorous way. Jayce Grayson really did it for me with this book 🙂

Along the way you will meet four people that hope to board the Xianne, which is owned by the mysterious and extremely rich Tom Duncan. The main character, Jim, is a young man who hopes to find passage and work on the Xianne. He applies for the job by filling out a strange questionnaire, where he meets the other three people that eventually join him aboard the ship. They are Sax, Suki, and Keira. These three people could not be any more different than Jim if they tried. In the questionnaire room, they look over Jim’s shoulder while he is filling in his answers and began a conversation about the ask/tell question, which asks your sexual orientation. They realize that Jim is NAY, which means that he is not sexually attracted to anyone. Yes, I know, how weird is that??

That sparks off a friendship between one nay and three highly-charged sexually active people. Once aboard the ship they meet Tom Duncan, Dr. Sharon Miles, and Moses Jones, who are the only three people aboard the ship besides a crotchety old artificially intelligent computer. This begins a trip like you have never taken before, unless of course you have been on a swinging cruise or something similar lol. Jim’s adventure takes him on a ship where sex is enjoyed and shared by everyone publically, besides him and Moses. Jim has to learn how to handle, and deal with, all the sexually charged tension, while fitting in and becoming a part of the group. He stays true to himself, even though he is given many opportunities to join the “party” so to speak, as well as a very close relationship with Dr. Miles. I could go on and on about this book, but I do not want to post any spoilers so I have to stop.

The bad thing about this is I do not know how to explain it to its full potential.

Yes, this book is a panty-drenching, hilarious ride that will have you gasping for more when you hit the last page, but it is also a look into humanity and what our culture is coming to. This is a world where almost nothing is taboo and even marriage is not sacred, but then again, people are free and liberated to do what they like. Regardless, you will have to make up your own mind about this book and I urge you to give it a chance.

Xianne is super-entertaining, perfectly edited, and a laugh-out-loud, make you think masterpiece! I give this book 5 stars and I cannot wait to read Volume 2!

(Which I have half of even though it is not due for release until early 2013! Ha-ha! The joke is probably on me though because I am going to die when I read it and it stops mid-book. That Jayce Grayson is cruel!)

Quotes from the book:

“I think that beautiful people are beautiful-even if they’re naked. Sometimes, especially if they are naked.”

“Sexual orientation is just a matter of our preference.”

Once again if I have talked you into reading this book, please leave a review for the author where you bought it. Every review helps the author. There is a link to buy the book under the picture and a giveaway below that. 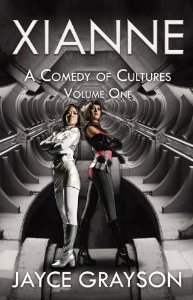 Amazon: Xianne: A Comedy of Cultures: Volume One

I have TWO SIGNED copies of Xianne up for grabs today. It is easy to enter, and you get three chances.

1) All you have to do is comment on this page about the review.

*For extra entries show some support to Jayce Grayson and let me know that you did. He has a new author page that needs some likes and a new blog on Goodreads! Don’t forget to tell me that you liked him on Facebook and/or followed him on Gooodreads.

Contest ends 8/8 at 8am CST. Names will be entered into a random name generator however many times you entered, and two winners will be announced shortly after. Thanks!