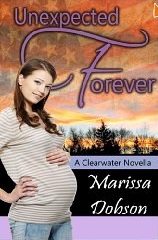 The stick turned blue and Tessa Bradley’s world fell apart. But unplanned turns out to be the best thing that ever happened to her. Add a marriage of convenience to her best friend and unplanned just might give her the happily every after with the man she’s always loved.

Gunny Cameron White devoted his life to God, country and the Corp. Marriage has never been a blip on his radar. When his best friend—a woman he’s always loved—turns up pregnant and alone, he throws out the rule book and commits to her like a Marine.

Can two people overcome the choices of their past when an unplanned baby gives them the chance of an unexpected forever?

Pregnant? Tessa Bradley’s hand slid across her abdomen, was there really a little person growing inside her? Her doctor’s voice droned on, but she couldn’t hear him. She was twelve weeks pregnant without a father for her baby, and after today’s shift—an unemployed mother-to-be.

It can’t be…I was so careful.

She hit the end button on her cell phone, and slipped it back into her pocket. During the last nine weeks, she’d worked as the secretary for a law firm in town, while their permanent one was on maternity leave—talk about irony.

How was she supposed to be a mom when she didn’t even know how to take care of herself?

“Tessa, there you are.” Mr. Jacob smiled as he stepped into the office. “I wanted to give this to you before you left. It’s just a token of my appreciation for stepping into Bev’s shoes while she was on leave. I thought this might turn into a permanent position when I hired you, but Bev obviously has other plans. She wants to come back. If things change, you’ll be my first call.” He offered her a plain white envelope.

“Thank you. I appreciate it.” She accepted it with a small, honest smile. Mr. Jacob was a wonderful boss and a good lawyer. He truly cared about his clients and did everything he could to fight for them both inside and out of the courtroom.

“Very well, it’s Friday and we have no more clients booked for today. Why don’t you take off and enjoy your weekend?”

She grasped at the generous offer, especially after the doctor’s call. She needed to get out; maybe a walk in the park would help her clear her thoughts. Maybe then, she would have a better idea what to do about her situation. In a daze, she moved around the office and gathered her things.

“Thank you again for the job Mr. Jacob.” She called to him from the door as she slipped her purse over her shoulder, and let herself out for the last time.

The air felt cool against her flushed skin, and the wind tugged her long brown hair, but she didn’t care. Heading into the park, she made her way past the children’s playground.

One day I’ll be one of those frantic mothers watching from the bench praying my child doesn’t get injured.

The countdown to ‘one day’ ticked faster than she’d ever imagined.

“Tess?” He looped his arm around hers, startling her out of her reverie and pulling her to a stop.  “Aren’t you supposed to be working?”

Cameron White stood before her in his breath-stealing, damn-isn’t-he-good-looking crisp blue Marine uniform. The medals on his chest made her proud—and served as the steel fence between the future she’d wanted and the life he’d chosen fifteen years ago.  He was a fine specimen of manhood—over six feet, muscular from his military training and hours in the gym, and shoulders wide enough to carry the world.

Over the years, she’d nursed a long-standing fascination and attraction for Cameron, one he refused to acknowledge after he joined the Marines. She tried to supplant the desire, redirect it to someone else, but even Brian didn’t measure up to the yardstick she judged all men by. They weren’t Cameron.

Young Marines spoke of him with respect, edged with fear. She knew he was strict, and expected only the best from his men, but he was also fair. Whenever someone needed a helping hand he was there, helping, guiding, but he expected his men to learn from their mistakes—to pay for their mistakes with pushups, loss of leave, whatever it took to drill the message home. He pushed his men to the breaking point, making them the finest Marines he could and he wouldn’t stand for them to give less than one hundred and ten percent.

“Why are you in your dress blues?”

“I just left John’s wedding, they pushed it up so they could be married before he ships out. It was a nice ceremony by the lake.”

She heard him but it was as if his words came through a haze, distant and she couldn’t focus. Her legs felt heavy, and her head swam.

“What’s wrong Tessa? Are you feeling okay?” He cupped a hand under her arm and guided her over to a bench.

“I’m fine…I just need to go home.” God help her it was good to see him. He was like a port for a ship lost at sea but she needed to wrap her mind around what she was going to do—and how could she tell him? She didn’t think she could bear his disappointment.

“Come on, I’ll take you home.” Arm around her waist, he pivoted neatly and guided her toward the street.

“I’m fine. My apartment isn’t that far, I can walk. I’m sure you have other things you need to do before you have to go.”  Even to her, the words sounded flat and they wouldn’t convince him, but it was all she had left.

“You’re all that matters today. I was coming over once you got off work.”

Even if he didn’t believe her, he didn’t force the subject. Maybe all the years they had known each other had enlightened him to the fact that if he pushed she’d only shut down more. What am I going to tell him? She tried to think of something, anything as he led her towards his car. They only had a few days left together before his upcoming deployment. She didn’t want to ruin the time she had left with him by bringing up her mistakes.

Just the thought of another deployment was enough to send her into panic mode. Yes, he was career military and that was part of his job, but it scared the hell out of her every, single time. In truth, he married the Marines from the day he enlisted. He wouldn’t be there for their weekly movie date, or nightly chats. Selfish? Yes, but he was such a large part of her life, she didn’t know how to give it up—even for only a short time—without her heart breaking.

If she were honest with herself, she’d admit she was in love with him, and had been since they were sixteen. Fifteen years later nothing had changed, at least not for her. For Cameron, he’d chosen the Marines, and that loyalty was absolute. He left no part of himself free for a girlfriend, let alone a wife. No matter how much she’d always wished otherwise, Tessa had accepted they would never be anything more than friends. Cameron wouldn’t allow anything more. He said something else, but she didn’t really understand it, the world around her tilted and she swayed. Blackness swamped her vision and everything faded.

This site uses Akismet to reduce spam. Learn how your comment data is processed.